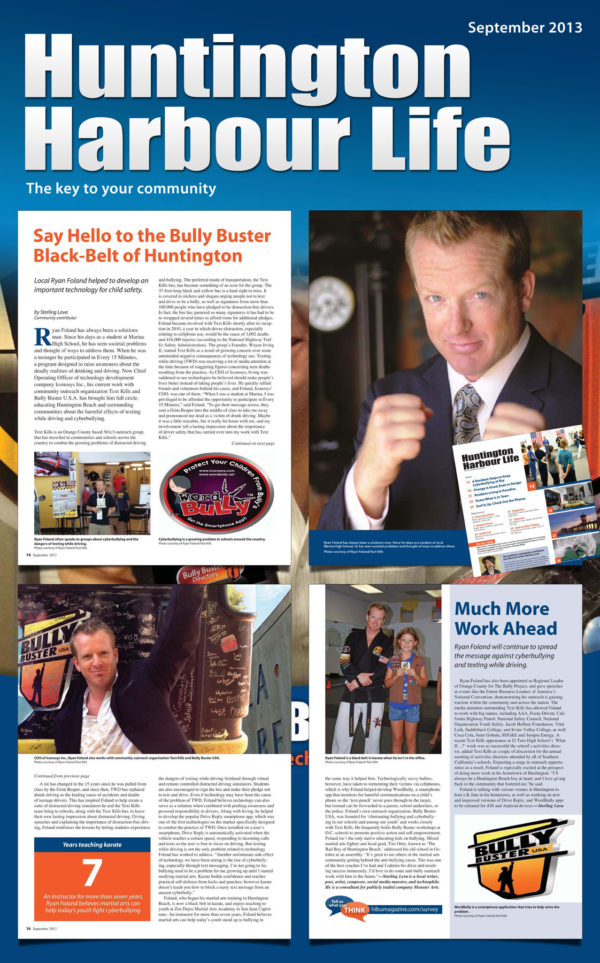 I enjoy giving back to the community. In 2011, I turned my focus to my passion for helping kids who were being bullied. I started a program called Bully Buster USA®, and traveled around Orange County, putting on Anti-Bullying workshops that I developed for middle school and high school students. The work was extremely rewarding and marked the beginning of my pursuit to improve my public speaking skills.

Recognizing the rise of cyberbullying, especially as the use of cellphones rapidly increased across all ages, I took to technology and helped create one of the first anti-cyberbullying apps called WordBully. The app prevented identified words from reaching targeted phones and notified parents if their children were either being bullied or were being bullies.

My involvement in bullying education and the development of this app idea helped to connect me to an app development firm that focused on child safety apps, and I ended up working with them as Chief Operating Officer.

I gained extensive startup experience, as each app we developed in-house was treated like a small company. We also helped develop mobile applications for many other businesses, from mom and pop organizations, like Dana Point Whale Watching, to Fortune 500 companies, like Del Monte.

When my contract was completed with the app firm, I decided that I wanted to work more closely with entrepreneurs and startups to help them on their journey; leveraging my life experience to help them learn both what to do, and more importantly, what not to do.

In 2014, I was hired as the Assistant Director of a new entrepreneurship center called the Blackstone LaunchPad, at the University of California, Irvine. It was just the position I was looking for, as it gave me the opportunity to help students learn from the would-have, could-have, should-haves of my failures and mistakes.

One of my most costly mistakes also surfaced during this time, when I was served and dragged back into an FTC Investigation regarding the company I had left in 2011. This process was one of the most difficult things I have ever dealt with, both mentally and financially. I accepted a settlement with the FTC in 2015, and have since been focused on moving forward with my life.

I continue to try and turn this negative situation into one that has a positive outcome by focusing on teaching others to learn from what I have gone through. The saving grace from it all, was realizing the importance of being real, being human, and being flawed.

My position at UCI, helping early-stage entrepreneurs was the perfect place for me to focus on giving back in a way that was fulfilling and had a real impact.

I pushed the envelope on campus and created quite the ruckus. I would make seven-foot paper aeroplanes and throw them off the top of the Student Center, then would get a call saying that such behaviour was not allowed. It did make for a great video that we posted on social media though. I also got the center sponsored by hoverboards and began letting students use them around campus as a way to promote the center. Within a month, they were banned on campus, and so we got even more creative. I went to ACE Hardware, the 99Cents Store, and Home Depot then built a 6-foot SnapChat Ghost. Students would wear it around campus, and we made a social media scavenger hunt game out of it. When I got a call with faculty complaints that a ghost showed up to their classroom, we laughed and changed our outreach efforts.

One unassuming day, I got called into the boss’ boss’ office. I got that funny feeling. The one where you think you might be fired. All of the guerrilla marketing efforts, the tactics that got students to know about us, was going to come back and cost me my job, I knew it. I could feel it. And so, I went to the meeting knowing what was going to happen.

In my brain, all I could think of was the disappointment, anger, and the reality of having to start all over again. For the last 18 months, I had dedicated my entire being to promote the ANTrepreneur Center, and my 100% focus was in helping students start companies. But here I was, about to be fired, and my whole life flashed in front of my eyes. Well, at least the next 10 years. I thought to myself, as the meeting began, I have to do something different. I can’t just invest all that I have into a company that I start or a job that I have. Because if things change, I am back to square one. Actually, square zero. So that is the moment when I decided to start to build my personal brand. And this time, with a focus to make sure that whatever I did in the future, would put my brand at the center of what I was doing. That way, as things change, I would still be able to build on my personal reputation, regardless of the company I ran or worked for.

This was truly a tipping point for my life.

I ended up not getting fired, but actually got promoted to oversee 25+ units on campus, including the ANTrepreneur Center, but they wanted me to help the university duplicate some of my success I had gained with our creative outreach. This whole ordeal, I explain in my 2nd TEDx talk, called Borderline Millennial Disorder.

One day, my friend who worked at Microsoft, called me and asked if I wanted to go to a networking event that he had an extra ticket to. Without much thought, I said yes. Little did I know that “yes” would change the trajectory of my life.

The party was at Keith Ferrazzi’s house, a New York Times bestselling author who was famous for his house parties. I showed up not sure what to expect, and found a crazy house on the top of the Hollywood Hills, with super successful young entrepreneurs from all around the world.

An hour or so into the event, Keith called everyone into his living room., asked everyone to put away their phones, and he got vulnerable. Then he asked us to do the same. We all got assigned random tables and we were told to go around and introduce ourselves by saying what was not going right, both professionally and personally. Whhhaaaa?

But that is what we did. I stood up and told how I was writing and no one was reading. How I wanted to speak, but no one cared. I cut to the chase and explained my frustration.

I admitted that I was confused about social media, and didn’t know how to build my personal brand.

Sure, a long time ago, I started Facebook and Twitter pages, but I never checked them and didn’t really understand how to navigate online profiles. Social media felt risky to me because historically I’ve kept to myself to avoid exposing my vulnerabilities and failures.

I was used to my ‘brand’ always being tied to my business ventures. This is a cycle that many entrepreneurs get stuck in, using their company to essentially “hide” behind. But over the past few years, as I’ve grown and become more confident, I’ve realized there is no reason to hide.

I’ve used various strategies to connect with people online, like writing blogs or making videos but doing those things alone don’t build relationships or trust. It wasn’t until I shared both good and not so good life events that I was able to really connect with people.

Because at the end of the day, if you are not open with others then they are not able to relate to you. And if they can not relate then they have no reason to invest their time in your content.

This is the basis for my book, Ditch The Act. When you share both good and not so good things, then people will see that you have something in common: you are both human!

I soon started to get traction, as I began to focus in on my messaging and content creation. I got verified on all my social media platforms and started to see inbound speaking requests. First within the US, then from places like Portugal, then China, then Haiti, and Africa.

Hire Me
Book an Appointment with Me 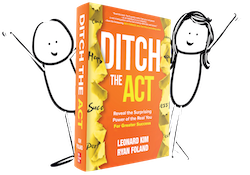